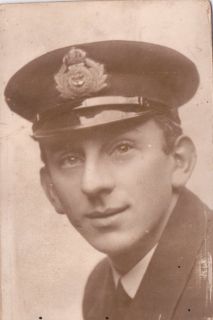 Elie Robilliard b.1894,  was at sea by the age of 14. Amazingly he was torpedoed 4 times in World War 1. He was the only survivor after the sinking of The Star Guernsey and was adrift for 24 hours before being resued. Elie served on the  S.S. Briarpark and was listed as First Mate on the S.S. Hazelpark in 1925. He was Master of  the Sarastone in the 1930's, when many of the crew were from Borth. In  1940, with the war just starting, he was in Australian waters commanding the tramp steamer Creekirk  which was  built in 1912. It was not long after he returned to home waters that he was lost on this small vessel

In the 1920’s Captain Robilliard and his wife, who had Borth connections, came to live at Torteval House, it was named after his ancestors home in the Channel Islands. They were to have 3 children, Eve, David and John. Unfortunately Eve died in 1930 and is buried in St Matthews Church. The eldest son David followed his father’s footsteps and became an officer in the Merchant Navy.

In 1940 Captain Robilliard was in command of the S.S. Creekirk, a 3,917 ton vessel owned by Muir Young Steamship Company London. The ship was carrying 5,900 tons of iron ore bound for munitions factories in the U.K. the ship was to be part of a large convoy that was gathering at Sydney, Cape Breton, on the Atlantic coast of Nova Scotia. 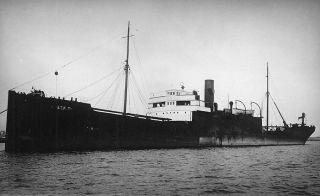 At a pre-sailing conference all the ships captains were appalled to find that only one Royal Naval escort ship, H.M.S. Scarborough, had been allocated to defend the 40-strong convoy. The Scarborough was poorly armed and had no real offensive capability. Both Captain Robilliard and Welshman Captain Ebenezer Williams of the S.S. Fiscus were among the loudest protestors, but were told that the plan was to sneak across the Atlantic until they reached the safety provided by the destroyers of the Western Approaches command before they could be detected by the enemy!

Convoy SC7 sailed on the 5th October 1940 bound for Glasgow and Liverpool. Bad weather and technical hitches to some of the antiquated vessels slowed the convoy down, but all went well until 17th October when with less than 150 miles to the rendezvous with the Western Command protection vessels, they were spotted and the German High Command ordered a wolf pack attack. The first ship to be sunk was the Trevisa, which had become a straggler. Then its destroyer U Boat 48, realised that there was a large convoy ahead. With darkness falling it was hoped that this would bring some cover, but a bright moon and clear skies made the lumbering vessels easy pickings. Unexpectedly H.M.S. Bluebell, Fowey, Leith and Heartsease arrived to lend assistance but were unable to prevent the sinking of the Langedock, Scoresby, Aenos and Caresbreck during the following 24 hours. In the next 48 hours the Convallavia and Beatus were sunk within sight of Captain Robilliard, and in the time honoured manner of seafarers he came to a halt to try and pick up the survivors of those 2 vessels, most of whom were in the water. At this point the stationary S.S. Creekirk was a sitting duck and the captain of U Boat 101 fired a single torpedo into its target. There was an almighty explosion and the Creekirk sank swiftly with total loss of life. Captain Robilliard’s humanitarian instincts had sealed his and his crews fate.

“Jock” McKinnon, the convoy Commodore, who had had a long and distinguished career with an array of medals to prove his seamanship and bravery, was blamed for the disaster. He was poorly served by being given an almost suicidal task. He was lucky to survive being in the sea for hours himself, and despite petitioning for another posting to contribute to the war effort, he was refused and never went to sea again.

I wish to thank Robert Hughes-Mullock F.R.A.S. for the convoy details. I would also like to thank John Robilliard and his late brother David’s daughter for their contribution.