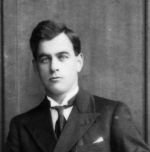 Horace Ivor Jones 1895-1963, first went to sea at sixteen years of age with his uncle Captain Lewis Williams Picton House, on the Castle Bruce. Horace and his cousin Vernon Williams were popular characters who were constantly getting into mischief. At one time, they caused a great stir in the village by firing shots from revolvers that each had brought back from sea. There was a great hullabaloo but no one was hurt, or prosecuted.

Guns and the Williams family were no strangers. At the wedding of Vernon’s great uncle Captain Lewis Williams’, to the daughter of local butcher Evan Hughes, it was reported that “at an early hour guns were fired and flags were flying at various places out of respect for the young couple”.

Horace Jones lived at his family home Craiglea and went to sea in 1910.  He was on the steamships Lady Carrington, Armenia and Saracen, before becoming third mate in 1915 on the S.S. Menapeam.  His next vessels were the steamers Usher, Broompark, Slav and Southern. He became second mate in 1921 on the steamships Elmpark and H.H. Asquith, and got his masters certificate in 1928. For the next few years he served as first mate on many vessels, including, Backworth, Knight of Saint John, Knight of the Realm and Cape Howe. By 1937, he gained his first command the Cape Sable, on which he took his wife on several occasions. All this came to an abrupt end with the Second World War, as the Cape Sable with Captain H. I. Jones, now seconded into the R.N.R. with the rank of Lieutenant Commander, saw some of the grimmer aspects of the conflict, especially in the Baltic Sea. Horace was also related to the Jones mariners of Maesarfor.

Horace's father was Captain John Jones b.1863, who commanded the S.S. Graffoe in 1903, Collingwood 1903-05 and Armenian in 1912. The latter vessel became stranded in the Goeree, Netherlands, due to pilot error in 1914. Whilst he was captain of the Usher from 1915-1917, his son Horace was with him as well as A.B. Richard Hughes of York House. The S.S. Usher successfully engaged and sank two enemy submarines. Captain John Jones' last command was the Charles Tellier in 1918 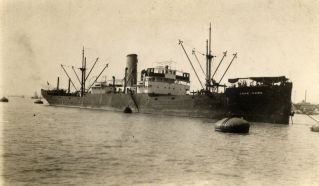