Peter Norrington-Davies was born in 1950 and lived at Dolybont; he was one of three brothers, two of whom joined the army. He was educated at Ardwyn Grammar School, Aberystwyth, and then joined the Royal Navy in 1969 as a cadet at the Britannia Royal Naval College Dartmouth; class 204. There followed an intense period of basic training where he travelled to the Baltic in the summer. He was at sea on H.M.S. Torquay as part of a group of forty cadets who worked and lived as Ordinary Seamen, doing all the mundane tasks; chipping, painting and general deck duties, and even slept in hammocks.

His second year was spent at sea as a midshipman on H.M.S. Arethusa, which was a Leander class frigate. During this time they were patrolling the east coast of Africa and blockading the port of Beira during the Unilateral Declaration of Independence by Rhodesia. He left the area calling in at the Seychelles and then on to Singapore. Peter was then flown back to Dartmouth to begin his third year, which was primarily academic, which included studies in engineering, physics, maths, navigation and languages. He chose to study Norwegian and became competent in this language. This choice was influenced by a memorable hitchhiking holiday he spent in Norway in the company of Michael Griffiths of Borth and Idwal Steadman of Llangwyrfon. Peter chose to specialize in navigation as he had easily passed his higher mathematics examination, and successfully concluded his third year. He recalls with gratitude the latitude given to him by the naval authorities during this time, as he took up recreational flying to gain his private pilots licence.

During this period he was lucky enough to be invited by a naval pilot to take a  flight in a Hunter jet. The Navy gave him permission to do this as it would broaden his experience. After discussing the flight plan, he phoned his parents at Dolybont to inform them that he would be visiting the area. It was a wonderful experience and when they reached the Dyfi Estuary, they turned south over Cors Fochno and up over the slopes flying over Dolybont where his parents and friends were enthusiastically awaiting his arrival. Then he flew down the valley to Borth, and then south along the coast and inland over Aberystwyth to his old school where his brother Patrick, proudly announced to his school chums “that’s my brother flying overhead”.

His fourth year courses included communications, gunnery, navigation and mine clearance. This was to broaden his knowledge of the whole gamut of naval operations. During this time, he applied for leave to crew and navigate a large privately owned cruising vessel, the Dematra that was being taken to Greece for a shipping magnate. He was given naval blessing as it was again deemed appropriate experience. Peter arrived at Cowes to board the vessel and report to Captain Sir Richard Duckworth Bart, an ex-Indian Army officer who had a false hand because in a reckless bet he managed to hold on to a thunderflash the longest, and in the process lost his hand. Peter could not get over the fact that ashore the captain wore an appropriate prosthesis, but once he boarded ship, he donned a piratical hook.

It was decided to test the highly powered Dimatra by taking her round the Isle of Wight. There was quite a big sea running outside the sheltered coastal stretch. Peter thought wisely, that caution should be the order of the day in such conditions, as not only had he a few years service in the Navy, but he had been boat handling since a youngster at Borth. However, the order “full speed ahead” was given, the vessel banged along through the waves, and there was one particular wave that Peter realized must have surely been damaging. The vessel was slowed down from the twenty or so knots they were making, and an inspection revealed a large leak. Slowly but surely, the vessel was taking on water, and as Peter said, “even the expensive carpets on this gin palace were getting soaked”.

An emergency call was made to Yarmouth and they proceeded to limp back slowly in the steadily sinking vessel, and as they entered harbour, lo and behold the Yarmouth lifeboat hailed them to get out of the way as they were off on an emergency. Peter informed them that they were the emergency, and to clear the entrance to let them berth. Eventually the Dimatra was pumped out, the large hole repaired and a refurbishment of the sea-soaked areas was undertaken. Again bad luck intervened, as engine failure, because of corrosion, meant that more repairs were needed. All this took three months and eventually it sailed for the Mediterranean, but Peter had to leave her at Gibraltar and fly back to the U.K. as his leave time was finished.

Whilst doing a communications course at H.M.S. Mercury, he and others found recruitment circulars for submarine duty in their pigeon-holes. To a man, they crumpled the notes up and threw them away. This was a very bad move as if they had read the circular properly they would have noticed that it was to be signed and returned if they did not want a post on submarines. Soon afterwards, Peter received notice that he was appointed as a submariner, which threw him into a total panic. How could this have happened? He was so desperate that he used a social connection and managed to get an audience with the Second Sea Lord, Sir Gordon Tait, to plead his case. It was all to no avail, even though he pleaded claustrophobia, he was gently persuaded to accept somewhat reluctantly, that because of his mishandling of the original note, he was now committed. His case was not helped at the time because there was a shortfall of officers in the submarine division of the navy.

He joined the submarine H.M.S. Andrew at Oslo, where he amazed those there with his ability to speak a little Norwegian. He served for a time as a Gunnery Officer, as this submarine was the last to have a gun deck, but the Andrew’s days were over and she was decommissioned in 1974. Peter was then appointed Navigation Officer on H.M.S. Orpheus, an Oberon Class submarine. He was then on H.M.S. Repulse, H.M.S. Conqueror and then as First Lieutenant on the Osiris. He was selected for the Commanding Officer Course on H.M.S. Perisher in 1984. On successful completion he was given command of H.M.S. Walrus. At thirty-two years of age, he was now solely responsible for the varied and complex aspects of operating a sophisticated £60,000,000 warship. Peter was subsequently appointed as a Submarine Operations Officer to Flag Officer Submarines, based at the joint headquarters at Northwood. As he jokingly observes, seven years of his twenty-year service in the Royal Navy had been spent under water. 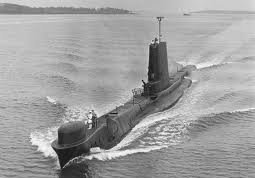 Whilst he was in the navy he bumped into two Aberystwyth lads, one David Williams, the son of the late Gwilym Williams, a well known local fisherman, who was on the staff at Northwood Control Centre, and Peter Rees, who worked in helicopters based at Portland Naval Station, transporting staff to and from submarines. Peter recalls one surreal experience he had on the nuclear submarine H.M.S. Conqueror. This submarine was the first to go through the Panama Canal, and with other vessels, was to participate in joint exercises off the west coast of the U.S.A. where for a short time their shore billet was the Queen Mary at Long Beach California. Some of the exercises were cancelled so the captain called Peter aside and told him to fix a visit elsewhere, as there was now time for some rest and recuperation. After many communications back and forward, it was arranged that they visit the U. S. Virgin Islands, and they were directed to St Croix in Friedericks Harbour, which had a substantial jetty that was classified as a nuclear berth. Via the British Ambassador, their point of contact in the islands was to be the improbably titled Trade Winds Liquor Store. Peter thought this a bit odd, so he checked to ensure that there was going to be accommodation for four days for 108 men, transport and stores. This was all fine but they were told that the jetty might not be finished as it was in the process of being extended to cater for cruise ships.

They duly arrived at seven in the morning to a bizarre scene. Golden palm fringed beaches, totally deserted, with a long jetty reaching out to sea with no decking on the last 200 feet. There were obvious signs that works were being undertaken at the end of the jetty, so to reconnoitre their anchoring point, the inflatable was hauled out of the bowels of the submarine and got ready. Off went the scouting party, and after a while, they signaled that the place to tie up was between two massive posts in an area beyond where there was decking. The 5,000-ton nuclear submarine was tied to two posts and a group of seamen tore off the shuttering boards from the recently poured concrete, and with other builders gash that was lying around, they built a platform to access the jetty properly.

A forward party then wandered up to the ramshackle Trade Winds Store, where they were made welcome, and champagne was soon flowing freely. An hour later, a busload of local women, not men, arrived to finish off works that provided a reasonable gangway down to the jetty, and transport and stores followed quickly. They had a wonderful four days on an almost deserted part of a tropical island with a very expensive and hi-tech vessel belonging to Her Majesty’s Navy, tied up to part of a jetty under renovation.

After an outstanding career and reaching the rank of Lieutenant Commander, Peter moved back home to Dolybont, it was inevitable that he would continue his association with the sea, but now on the surface. He spent a year or so as deck hand on Robert Gorman’s lobster boat out of Aberystwyth, followed afterwards by a short period operating a charter fishing vessel business. Ably qualified, it was no surprise that he was appointed Aberystwyth Harbourmaster, and in 1999 he became the Ceredigion Harbourmaster, responsible for the ports of Aberystwyth, Aberaeron and Newquay.