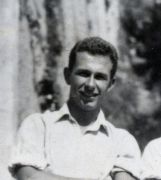 John “Jac” Evans b.1936 and his older brother Gethin b.1933, of Deudraeth House, both went to sea. I remember Gethin Evans arriving at Soar Chapel in his R.A.F. uniform on a long ago Sunday. It caused a welcome distraction as Raymond Cousins, Thomas Glyn Evans and I, were trying desperately to read a verse, supposedly learnt by heart, from the Bible through the communion wine hole in front of our pew. I think our long suffering Sunday school teacher, Mr. Jones of Preswylfa House, had realized our weekly verse reading was too flawless to be genuine, and also done with suspiciously uncharacteristic piety, as our foreheads were pressed against the front of the pew. Gethin was receiving a copy of the New Testament, a gift from the chapel elders, to take with him on his National Service stint. He served in Germany with the R.A.F. regiment for two years before returning to finish an apprenticeship as a carpenter with his uncle’s firm Dole Builders. Soon after the sea proved too much of a lure and being a bit of a radio ham, decided to train as a wireless operator. This took him to London where he soon found that the course proved to be quite stressful; as now in his mid twenties he feared failure. He recalled a problematic practical test where each candidate was given a certain time slot to ascertain and remedy a purposely-arranged faulty radio. Gethin tried everything he had been taught to no avail, and in a last desperate effort he checked something that he thought would be too simplistic a task set by the examiners. He checked the crystal, and lo and behold, there was none. So from a large box of supplied spare parts, he placed a crystal in the radio just in time.

He went to sea on tankers for four years, and enjoyed the life, but marriage was beckoning. At the same time a potentially life threatening incident occurred whilst he was off the coast of Canada, when he developed a severe case on appendicitis. He was winched up into a helicopter and taken to hospital in Nova Scotia. He underwent an emergency operation, and after convalescing came home. It had been a close shave, and if it had occurred in mid- Atlantic, he would have been in serious trouble. Gethin settled back in Borth to raise a family and run a building business and became involved in village life as a councillor and Lord Mayor. He, with Aran Morris, was one of the main instigators in bringing the lifeboat to Borth.

Jac Evans was in the sea cadets at Aberystwyth whilst still at school. He was invited to represent the cadets at a review on H.M.S. Dido, and for a time seriously considered a career in the Royal Navy. However he was advised by the old seamen of Borth to join the Merchant Navy, as at least he could leave it if he did not like it; unlike the Royal Navy. Jac went to the Merchant Navy Training School Vindicatrix. Soon after he became one of the youngest A.B.’s in the Swansea pool. Jac is often mentioned in the memoirs of his one time shipmate, the late Gerry Evans of Aberystwyth, who went to live in New Zealand. As I worked with Jac for a time for his brother’s building company, I heard many a yarn, some far too outrageous to print. Jac had sailed just at the end of the era of tramping steamers and had been to literally hundreds of ports all over the world. Some of the vessels he sailed on were the Kenuta, Loch Ryan and the Dashwood. I always remember him as a genuine, fun loving, kindhearted person, with never a bad word to say about anybody.

Jac would do the frying in his cooking hat which was an intricate piece of head gear, made of straw that he had bought years before in South America. One night whilst I was waiting for the fish to be cooked, black smoke seeped into the dining room, so I rushed down to the small back kitchen which was full of smoke and flames. There was Jac rushing out the back door with flaming pan, and by now a burning straw hat. To cap it all off his younger brother Billy came downstairs in a panic. We both followed Jac out the back as he ran down the garden ablaze, and flung the mackerel far out on to Cors Fochno. We had to douse a few of the flames that were now starting to singe his beard, his brother Billy’s concern was met with, “Get back to bed worse things happen at sea”. How his mother slept through all these commotions, nightly for weeks on end in the summer, is a mystery.

At one time Jac joined the Kanuta a cargo/passenger vessel belonging to the Pacific Steam Navigation Company in London. After calling at Liverpool she was bound for the west coast of America. It was the start of a long adventurous trip, as no sooner had the vessel came up to St George’s Channel, than it was enveloped in a dense fog. Jac was at the wheel when suddenly he heard a great commotion and shouting, and suddenly the officer on duty ordered the vessel to stop so that they could launch a lifeboat, as they had just run down a French trawler. Thankfully, all eight fishermen were rescued and taken aboard to be landed at Liverpool. Jac remembered all the cursing that the Frenchmen did every hour until they reached Liverpool. He found it sobering that no one including himself felt any impact when the vessel cut the trawler in half.

After leaving Liverpool they crossed the Atlantic and went through the Panama Canal and then on to Buenaventura in Colombia. Jac remembered it as a young sailor’s heaven, cheap booze and beautiful women everywhere. Eventually they reached Antofagasta in Chile, and taking time out there, Jac and shipmate Gerry Evans teamed up with a couple of South American girls who took them back to their flat. There they enjoyed some wonderful food, which was a change from that which they were served up on the ship. The Kenuta was leaving at midnight, but Jac was in seventh heaven and the party in full swing and forgot all about their ship which sailed without them.

The next morning they rushed down hoping to get a bus to Valparaiso to catch up with the ship. There was a nasty surprise waiting. The captain had left word with the authorities to put them in jail until the ship returned in two weeks time. They were given a camp bed to sleep on, and prisoners such as themselves were provided with meals. The shipping companies would be billed and the sailors’ wages docked accordingly when they got home. Being a country where wine was cheap, this was provided two or three times a day. As Jac recalled, they were quietly living like Kings.

By chance, some young detectives attached to the police station who had been on training courses in the U.S.A., decided to come and practice their English; resulting in a great friendship developing. This two week long siesta came to an abrupt end with the return of the Kenuta. Jac was hauled up before the captain, and he was duly told how much of his wages were going to be docked. Towards evening of that day, a message arrived that the police wanted to see Jac and his shipmate again. There was a great deal of smirking from the captain and the first mate, thinking that they were going to give Jac a bit of a pasting just to remind him of his misdemeanours in Chile. However, it was the detective friends, who took them on another nights’ bender round the town. Jac nearly compounded his errant ways by almost missing the ship again.

It seemed that Jac was forever in one scrape or another. He was on a tramp steamer in the Indian Ocean near the Seychelles, where the cargo that they were to pick up was guano. The crew was not very happy with this odorous task and spent as much time as possible ashore leading a languorous life for next to nothing. Essentially the crew were going “native” with the cheap liquor and the local girls. After three weeks of this, the crew were rounded up and read the riot act, as this was verging on mutiny. As Jac said “I think I have been in every scrape in the book, including near mutiny”. All came to a head when their tropical paralysis ended after the officers threatened to sail off without the rest of the crew.

Eventually, he married Ann an Aberystwyth girl and settled down to a shore life. He was in the fire brigade for a time and then went to work for his brother’s building company. Eventually he struck out on his own and was a builder based at Aberystwyth. I last saw him a month before he suddenly died when we arranged a night out on the town, which sadly did not eventuate. I attended his funeral and I will never forget the words of the minister who had known Jac for a long time when he said at the end of the service “that Jac was now going on his last voyage”. He was a much-loved person and I and many others of his friends miss him greatly.