Captain John Davies 1872-1947, of Maesteg House, Borth, was one of the most loved characters in the village. He was kind, considerate and a supreme optimist who worked all over the world in far-flung places. For five years he was in the Orient trading from the ports of Shanghai and Hong Kong, and later in his career worked on the Eastern seaboard of Canada and America, as well as plying the Great Lakes. He was a classic example of a seafarer who took the transition from sail to steam in his stride. He was a great entrepreneur who owned sail and steam vessels for nearly 40 years. 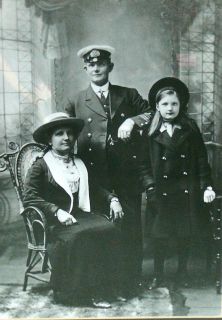 It all began with William Davies, born in Tresaith around 1805 who married a Borth girl, Margaret Evans b.1807, of Taicannol, and settled down in the village. They had five children, one girl Jane b.1831, and four boys John b.1834, William b.1839, Enoch b.1836 and Thomas b.1841.  All four boys were at sea by the time they were nine years old on coastal sloops. The three eldest boys did not see their thirtieth birthdays as they all died of tuberculosis and are buried at Llandre Church. This left only Thomas to support his mother Margaret and sister Jane. Thomas went to sea with Captain Richard Jenkins from the port of Aberdyfi. Later he obtained his master mariners certificate at Dublin when he was twenty-two years of age.

Thomas 1842-1911 married Margaret Williams 1842-1933, who came from Llanfiangel Y Creuddyn. He served as first officer on the Amethyst and the Vindornara and captained the Mediterranean for a number of years. They had five children, Margarita b.1868, William Thomas b1869, John b.1872, Enoch b.1875 and Evan b.1880. The boys were named in remembrance of  Thomas's brothers who were lost at sea.  Evan was the only son who did not go to sea, deciding to take up a scholastic career and eventually was ordained as a priest in the Church of Wales and became Vicar of Llandrillo, Merionethshire. John and William Thomas became master mariners and Enoch a ships engineer.

William Thomas Davies 1869-1934, went to sea at thirteen years of age on the barque Dora Ann of Aberystwyth. On his first voyage he went to the west coast of South America under the command of his uncle Captain John Lloyd. Afterwards he sailed in schooners and steamers, both in the home and foreign trade. He obtained his second mates certificate in 1890 and his masters three years later. He was on the S.S. Glanystwyth as Second Mate, then first mate on the S.S. Glanhavren, remaining on her until he gained his masters certificate. He was captain at twenty-five years of age and commanded the Glanystwyth, Etonian, Cheltonian, Carthusian, Rugbean, Clan Keith, Cliftonian, Northern, Plas Dinam and the Glenveck, which were owned by Mathius Co. of Aberystwyth. He stayed with this company until they sold all their ships in 1922. He managed to sail throughout the Great War 1914-1918, without mishap despite some very narrow escapes.

The captain’s only son, Gwilym Idwal Parry Davies, after completing his engineers apprenticeship at Vickers of Barrow, served as an engineer officer with the Blue Funnel Line, where he obtained his first engineers certificate. Later he took up a shore appointment with Texaco Oil Company in Liverpool; but as soon as World War Two broke out he joined the Army and became a Major in the Royal Tank Corps. 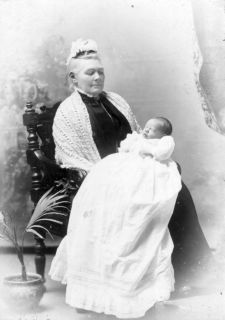 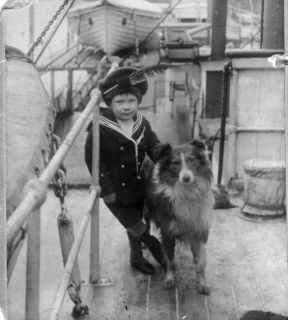 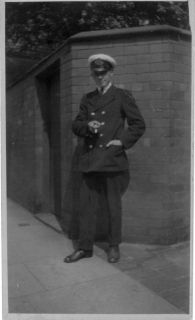 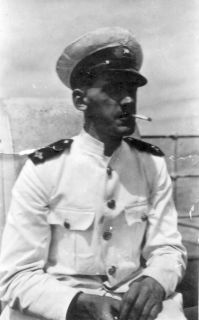 Enoch Davies 1876-1923, who lived at Grosvenor Villa, became a blacksmith at the Eagle Foundry Aberystwyth, and after receiving his indentures, joined the S.S. Glanhavren as third engineer. Promotion followed, and he joined the S.S. Feliciana as second engineer. In 1900, he sat and gained his first engineers certificate whilst he was back on the Glanhavren. During the Great War, Enoch was torpedoed twice, the second time was when he sailed with Captain J. O. Enos on the S.S. Cheltonian. After the end of the war, his brother John persuaded Enoch, to go halves in the S.S. Cornubia, which traded with John in command, and brother Enoch as chief engineer. This vessel ended her days wrecked on the Irish coast on a voyage from Galway to Ayr in Scotland. A terrific gale sprang up and as she was in ballast she could make no progress against the heavy seas. Consequently the vessel drifted beyond control onto the Mantle Rocks, 15 miles off Galway. The crew of ten landed safely near the village of Inveran. A large number of the locals boarded the ship and looted all that they could lay their hands upon. Sadly and rather ironically Enoch drowned in Gloucester Canal on 27th March 1923. 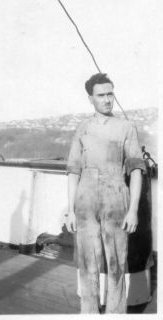 Enoch had married Janet Hughes in 1905. Of their four children only one went to sea, and that was Neermol. He served during the Second World War as sub leiutenant in the Royal Navy on H.M.S King George V. After the war he emigrated to Canada in 1947. 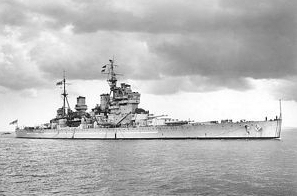 Captain John Davies 1872-1947, went to sea at the age of thirteen on the schooner Jane Owen, owned and commanded by Captain Richard Jenkins, who was at this time well into his seventies. This was quite remarkable as both John and his father before him, went on their maiden voyages with the same skipper. John sailed in many vessels of different types, and obtained his second mates certificate in 1893 on the barque Bidston Hill, with Captain William John Jones of Borth in command. Finding the next berth was very difficult as there was a slump in shipping trade at the time. 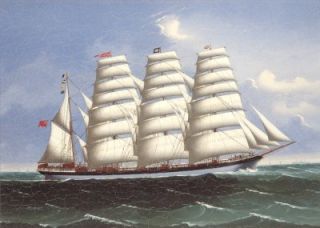 Eventually he joined the S.S. Alma and went on to serve as second mate on the S.S. Earl of Dumphries and S.S. Glantivy. He then moved back to sail on the large barque Lord Shaftsbury, and became first mate on this ship serving in that capacity from 1897 to 1899. He later joined the China Navigational Company Coastal Service to Shanghai, and remained with the company until 1910, before returning home. It was with this company that he gained his masters certificate in 1901. 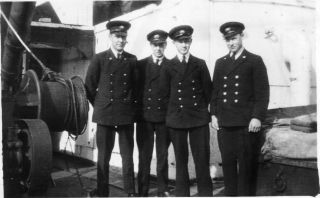 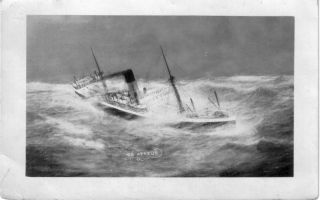 John Davies married Margaret Catherine Ellis, daughter of gamekeeper Hugh Ellis from  Dolgellau. They had a daughter Meiriona Ellis Davies, who later married Captain Lewis James Herbert. Mother and daughter joined the newly appointed captain in Shanghai where they lived for three years in Havelock Street. Granddaughter Jean Caswell relates how on many an occasion they had to admonish their Chinese nanny who kept binding infant Meiriona’s feet in the time honoured tradition, and simply could not understand why they kept undoing her well intended work. Apparently Meiriona’s feet were troublesome for most of her life. 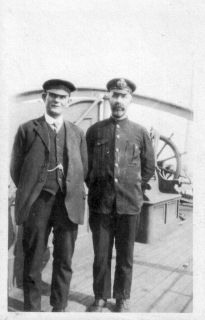 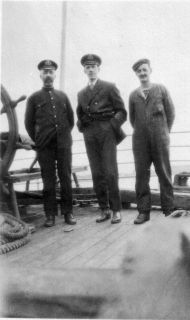 It was from his sojourn in the Orient that John Davies got his nickname John “China”, as he had captained the Klukiang and the Foochow.  Whilst at Shanghai, he met other Borth captains who were employed there for a time, Thomas H. Dutton 1865-1915 and Captain David Thomas of London Cottage. After John Davies’ return, he was appointed captain of the Margam Abbey, which was owned by Williams and Morley of Cardiff, a company that he remained with until the end of 1916, when this ship was torpedoed in the Bay of Biscay. He and the crew, which included Borth men, Rowland Ellis and John Davies of Trigfan House, were landed safely at Barry by the Italian steamer Antonia Silesia. By 1918, he was engaged in what was euphemistically termed “work of national importance”.

Captain John Davies was continually involved in ship ownership and made the transition from sail to steam effortlessly, in fact, even as late as 1920, he was buying schooners, one the Brandon, was sunk by enemy fire in 1918, and another the Industry was wrecked on the Irish coast in 1921. After that he concentrated on steamers, and as is mentioned in Captain L. J. Herbert’s memoirs, his father-in-law Captain Davies, took his own vessel the Myrtis to work on the east Coast of Canada and the Great Lakes, where in winter they often had to dynamite their way through the ice. When dense fog enveloped the St Lawrence Seaway the fog horn was sounded and its echo was timed to gauge if they were still in the middle of the seaway.

According to Captain Herbert, who was then first mate on the Myrtis, part of the cargo taken from Canada to the United States was alcohol…this was during the time of the American prohibition. Captain Herbert later swore his own son-in-law, Ken Caswell, not to relate the nature of that particular cargo to Mrs. Herbert (the daughter of Captain Davies), as she would be mortified because the family was strictly teetotal. Apparently to the initial mystification of First Mate Herbert, they docked at three in the morning at an unscheduled berth in total darkness. Suddenly warehouse doors opened and out stepped men wielding firearms. In the dim light provided the cargo, cases of alcohol, were quickly unloaded. Doors were closed and the armed men melted away. The ship then moved to arrive at their designated berth to unload a legitimate cargo. Captain Davies had obviously cast a convenient blind eye over that particular cargo as the proceeds went towards a successful business sojourn in Canada that eventuated in him purchasing land in Newfoundland. Captain Herbert’s daughter Jean relates that some of this land was sold to the Canadian Government to facilitate road building, but there is still some left which the family would like to sell off.

Aran Morris recalls that the captain was a coastguard in the Second World War, and that when a mine was washed ashore he took charge of things. His eyesight by this time was failing, and he led a group of Home Guardsmen who fired at the mine with the idea of detonating it! As Aran Morris said, “Thank God we did not hit it, otherwise it could have blown half of Borth away”. Common sense prevailed and the bomb disposal people defused it. At this time Captain Davies had built himself a little wooden hut on the foreshore opposite Maesteg House where he kept his telescope and binoculars for coast watching, as well as several herring nets that he used to set on the beach in the time-honoured tradition.

Captain Davies was founder member of the Borth Sea Scouts and taught the youngsters navigation. Borth carnival benefited from his enthusiastic support and organisational skills. He was a fine vocalist and at the reunion of the Master Mariners of the counties of Cardigan and Pembroke in June 1937, he is listed on the programme as singing eight solos, most of which were shanties. At this same gathering Borth’s Captain Richard Jones also sang a shanty.

My thanks to Jean Caswell for some of the photographs, and I am especially grateful to Paul Mosedale for the majority of those that appear on this page of the website.