David Rees came to Borth originally from the Aberaeron area  and married one of the daughters of Brynbwl Farm's then owners, the Raws. Another of the girls married master mariner Roberts of Borth. The name Raw came to the area in the mid 1860's with a lead mine overseer from Yorkshire who married a local girl and settled down in the Ponterwyd area. David Rees served in the merchant navy for a time, and through Borth connections got a ship to the Antipodes where he spent some time ashore exploring the possibilities of settling in Australia. In 1913 with war drums beating in Europe he got another ship back and in 1914 volunteered to join the army. Many other Borth boys gave up the sea to fight for the cause in the army, and those who survived went back to sea. Initially David was in the South Wales Borderer's, then the Royal Welsh Fusiliers and finally the King's Liverpool Regiment. He soon rose to the rank of lieutenant and served in that capacity in Greece and Egypt. Near the wars end he was promoted to captain.

A tragic memento of his war experiences, still in the family's possession is a horses hoof turned into a snuff box. In the last year of the war coming back from patrol he handed his horse over to an orderly and moved away, when the next thing he knew was a horrific explosion and a brightness that temporarily blinded and deafened him. When David regained his faculties he realised how incredibly lucky he had been as the orderly and the horse had completely vanished when the shell exploded and only a smouldering hoof remained. The latter he kept and turned into a snuff box.

After he married he returned to farm Brynbwl and raise a family of 4 children, Margaret, Jim, Gareth and Thomas. With the outbreak of W.W.2 he again volunteered and joined the Royal Artillery. He served for 2 years in Malta during that island's historic siege by the Germans. At 57 years of age David was the oldest serving gunnery officer at Malta. Back in Blighty he was to spend the rest of the war overseeing prisoners in P.O.W. Camps at Oldham and Boston Lincolnshire. He was awarder the Mercantile Marine War and Victory medals for service during W.W.1 and the Africa Star and defence medals in W.W.2.

His son Jim had a distinguished career in the R.A.F. During W.W.2. The other two brothers Gareth and Tom both went to sea for a time.

At the outbreak of the Second World War, Gareth was in the Merchant Navy serving on the King David as cabin boy. It was to be a round the world voyage, first to Murmansk and then to South America. Gareth was always susceptible to boils as a child and whilst at Murmansk developed a severe boil in his ear, which meant he had to be operated on there and then by a local Russian doctor. After this event he was deemed unfit for further service as he had become deaf. Eventually he recovered from the operation and never suffered boils again, despite continuing hearing problems. Unbeknownst to the crew of his ship war had been declared, and after leaving Russian waters a message got through instructing the King David to return to London where he was discharged for the rest of the war. Gareth prospered as an agricultural entrepreneur, and held many important posts, including that of the High Sheriff of Cardiganshire.

Gareth’s younger brother, Thomas Kinsey Raw-Rees 1931-2000, went as a purser on the Oriana in 1950, which was commanded by his uncle Captain R. W. Roberts of Borth. He went on several voyages to the Antipodes. He returned to farm Brynbwl with his wife Anne and contributed to the local community holding various posts with the County Council. 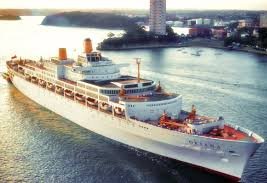