In the 19th century Richard Lewis constantly prayed for a big herring catch and set forth to achieve this in the aptly named John Wesley.... he was covering all options! John Jones had a more exotically named craft, the Sancho Panza. Others had historic names: Waterloo and the Black Prince. Some conjure up a delicate craft like the beautifully named Lily, or the Biblically inspired James. However I can only find one fishing boat named after the village, and this was the Borth Lass, skippered by John Edwards in the 1870s. 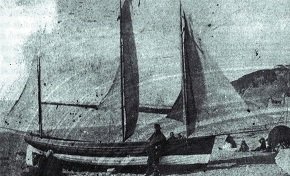 The traditional Borth fishing boats were up to 25 feet long in keel length and the design had been developed locally from the mid 1750s. This boat type has now been credited with being unique amongst Welsh boats of their kind in having three masts. There was a small soch (cuddy or forecastle), that the fishermen could take turns sheltering in during the often freezing conditions. When fishing commenced they threw the stone ballast gathered from the beach overboard and then removed the central mast. This created space amidships that allowed mobility and room for the wet and hopefully fish-laden nets to be piled for the home journey. There is also a more practical reason that written sources do not mention, and that is that these transom sterned boats had to be rowed from the central point backwards keeping their bow pointing out into the surf on their return to the shore to prevent capsizing. On some boats possibly all three masts may have been removable, which at times and under certain conditions could be even more convenient, especially when negotiating heavy surf during reverse rowing landing procedures. This boat design was supposedly taken to Aberystwyth around 1840, which coincided with the closure of the sea mouth entrance of the river Leri. This unique Borth type boat is only visually recorded in photographs taken at Aberystwyth. Apparently its design was the template for the later much larger Aberystwyth beach boat designed  for pleasure trips at the resort. 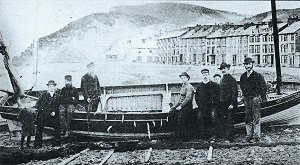 From about 1880 less complicated rigs were increasingly used, as can be seen in a photograph of a boat on Borth beach thirty years later in 1910. An earlier photograph taken in 1890 shows a number of traditional fishing boats drawn up on the shingle bank near Evelwen House, one with a fore and aft rig is drying its sails. This photograph was taken from a field just behind the old County Primary School, today's Community Centre. Around the same time an 1894 oil painting by James Burrell Smith (1824-1897), in the private collection of Peter and Celia Holt, titled At Borth near Aberystwyth, depicts a local coastal scene, and allowing for artistic licence, is undoubtedly Aberwennol. It includes in the foreground a woman with baskets alongside a local fishing boat up on the shingle, it has one mast, so presumably it also had a fore and aft rig. There were small open row boats with a single sail, which operated offshore within three or four miles of the village, such as the one in the photograph of Jac ‘Shami’ Davies the elder, catching a mackerel off Carreg Felen around 1910. 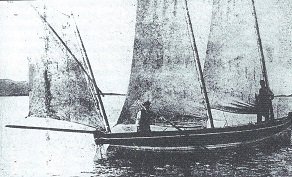 Up to 1900 Borth’s primary role in the context of herring fishing had been to provide the village and the surrounding hamlets and farms with this seasonal harvest. From that time there was a rapid decline in herring fishing, and with it boat ownership in Borth. In the following list of 19th century Borth fishing boats, the fourth entry James, had three sprit sails and was the last of the unique Borth fishing boat type with a removable centremast. Both the Bee and the Borth Lass were built decades earlier to the Borth design on the foreshore in between the lime kilns opposite todays Croeso.

Some of these fishing boats were named after family owned sloops and schooners such as Bee, John Wesley, Hope and Lorne.

Evan Davies listed above, known as Evan 'Mona' was a superb seaman. He was witnessed sailing the 22 foot Elsie in and out of the sea defence groynes effortlessly pulling up the centreboard in the shallowing water, whilst at the same time hauling in his two mackerel lines. He then tacked away from the shore recasting his lines, dropping his centreboard and sailed out. This manoevere he continued in and out of the then sea defences all the way from Upper Borth to Ynyslas (J. Richards, pers. comm. 1970). No doubt he like other village boys, some as young as five, had begun his seagoing experience in local herring boats. Many had graduated to coastal trading sloops by the age of eight, which honed skills to a remarkable degree. No wonder Borth produced a prodigious amount of able mariners. 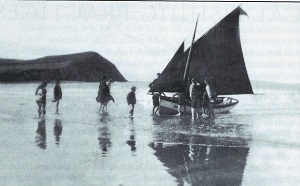 FISHING BOAT AT BORTH CIRCA 1910

By 1930 there were only a few small rowing boats left in the village which, as well as being used for fishing, acted as lifeboats. Ronnie Davies' antecedents at Morfa Borth, possessed one of the few boats left in the village in the 1930s which was often used as a rescue boat. This was in response to the growing number of bathing misshaps occuring with the increase in numbers of summer visitors to the village. In 1946, near Trwyn Cyntaf, on a stormy July day, with a gale blowing from the southwest, the ebbing tide created a viscious undertow which swept a bather out to sea. John Arnold Davies, owning the only boat at the southern end of the village, went to the rescue. Having launched the boat in the shallows, he was imploring someone to jump aboard as it was all he could do, even with his experience, to manage the boat in the treacherous conditions. Of the people that had gathered on the beach, only Pamela Richards had the courage to join him. This young woman had only recently arrived in the village as the bride of the author A. E. Richards. Just before boarding the boat she turned to the male bystanders and snapped; "call yourselves men"? The rescue was successfully completed by this duo after a hazardous return ashore, complicated by the need to row astern through the pounding surf (M. Davies, pers. comm. 1960). Arnold Davies conducted numerous rescues with little recognition. He and others were the unheralded precursors of todays lifeboat.  Later, largely thanks to Aran Morris, Gethin Evans and Ronnie Davies, a lifeboat was stationed at Borth which was far better equipped to deal with these situations than the heavy transom sterned boat featured in the 1946 rescue.

Having to adapt to the difficult conditions encountered when working from a storm beach meant that Borth men became an inventive lot. John Arnold Davies, who began his working life at 14 as a blacksmith at Penybont before going to sea with his uncle Captain John Davies, of Gloucester House, used his metalworking skills to good effect in a maritime context. He made a metal false keel that was slung over the side after the boat had been rowed past the surf. It came up under the boat's keel and was tied at bow and stern. With this in place the boat could carry a good spread of canvas enabling her to be speedier and more manoeuvrable. He and his father also designed a boat transporting device made out of light cartwheels that had a bridged axle with a long pole joined to its centre. From this axle there hung a strong canvas covered chain sling. This was pushed into the shallows and with the pole in an upright position the sling lay on the sand releasing the boat. Conversely when the pole was pulled down the sling moved up and lifted the boat which could now be moved along the beach. The ability to grasp and turn the big spoked wheel was a great advantage. This device was superior to the later car wheeled vehicles that came into fashion in the 1940s, which when bogged down in the sand were difficult to move manually. 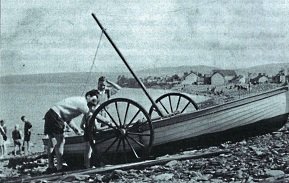 BORTH BOAT WITH CARTWHEEL CARRIAGE CIRCA 1940

From the 1940s, for the next two decades, there was scarcely a boat in the village. Then for a number of years in the 1960s, Gethin and Jack Evans ran the 28 foot fishing vessel Shandala from Aberystwyth Harbour, and at other times the from Leri mouth at Ynyslas. From then on there was quite a flurry of local boat owners, some fishing commercially and others for recreation. Jac Richards and Gareth Raw-Rees, owned the 36 foot ex-lifeboat Merch Y Mor. Also at this time Ronnie Davies and Sid Clare fished from a 16 foot bass boat and the larger 26 foot Ynys Enlli which was moored at Aberystwyth and often used for herring fishing. Alan Wells and Christopher Mee had a converted cutter that was based in the Leri. The Davies brothers, Derek, Teddy and Glyn, fished from a 15 foot open boat. Alun Evans and I owned an 18 foot dory, Glas Y Dorlan, which was ideal for Borth beach conditions. Kai and Anna Hubbard, and later Louis Delahaye, fished from small boats. All this was mixed fishing, including lobster, crab, mackerel, bass and herring. From the mid 1970s, David Samson has fished professionally from a large open boat based at Borth, assisted nowadays by Peter Williamson. As well as crustaceans, bass, turbot and mackerel, this duo harvest cockles and mussels from the Dyfi estuary. Recently others have begun to fish professionally, including the partners John Matthews and Michael Smith, using a small open boat, and Paul Burke"Abbo", working from a cobble. The lobster in now the main catch of these village fishermen and not the herring.