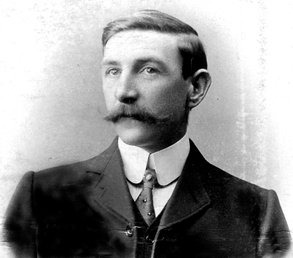 The James clan of seamen of Borth were so numerous and their lives complex that presenting all the data as a narrative is difficult. One of their descendants John Ellis of Aberarth, has amassed a copious amount of research on this family, going back to the 1700's, which will eventually be a sizeable website of its own.  The James family were one of the pioneers of ship ownership at Borth in the 1700's. This inclusion covers not only Captain John James 1875-1932, but his father,  grandfather and great grandfather, who were also captains.

Captain John James 1818-84, married his first cousin Ann Jones b.1823, at Llancynfelin Church in 1848. They had three children Mary b.1848, who died at three years of age when she accidentally fell into a container of boiling water. Another Mary b.1853, who married John Ellis a shoemaker from the Machynlleth area. The third child John 1850-1900, followed family tradition and became a master mariner. Their mother Ann died of consumption in 1854 and the two children Mary and John were bought up by their aunt, Captain James's sister, Margaret at White Lion Place, Borth. Margaret was by then a widow as her husband, Captain Richard Jones, had died whilst in command of the sloop Margaret and Mary on a voyage from Drogheda to Aberdyfi in 1853.

By the age of 12 John was a ships' boy on the sloop Friendship and soon a seaman on the sloop Aid. In 1842 he was mate on the schooner Mary and Ellen, and two years later at 26 years of age became her master. In the next decade he was master of the schooners Resolute, Beatrice and the Dovey Belle. All these vessels, except the Friendship, were owned by his father Captain Enoch James. Eventually John became owner of the Dovey Belle until his death in 1884. 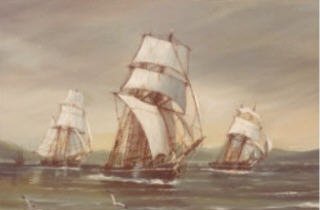 His son Captain John  James 1850-1900, married Sarah Jones of Aberystwyth in 1874. The couple lived at Mayfield House, Borth, and had nine children. William b.1876 of whom we have no details. Annie b.1879, married William John Hughes who died whilst serving on the S.S. Turcoman in 1915; Annie died a year after him. Richard b.1881, was with his father on the Dovey Belle in 1897 when he fell over the side unnoticed and drowned. Elizabeth b.1884, was a spinster who lived throughout her life at Mayfield. John b.1885, is the subject of this profile. David b.1886, died in a hospital in Norfolk in  U.S.A. in 1901 and is buried there. He was part of the crew of the S.S. Birmingham who succumbed to fever whilst docked at that port. Evan b.1888, died at three years of age. Hugh b.1889, whose career at sea was ended when he mysteriously disappeared whilst serving on the S.S. Wellpark on a voyage form the Baltic to the Tyne. Alfred, the last born in 1889 lived to be only three years old.

Captain John James 1875-1932, was one of only three siblings to reach middle age. At eighteen years of age he was listed as ships' boy on the family owned Dovey Belle. He rapidly rose through the ranks and was an able seaman on the 1400 ton Borth owned barque Caradog voyaging to South America. By the time he had passed as second mate he had sailed on the barques Glendovey and Gwalia. In the intervening time he had spent most of 1898 as master of the Dovey Belle on coastal voyages. With all this experience he gained his first mates certificate for foreign going vessels.

John then moved to the steamships Regnant and Amyl, and served as first Officer on the Annie Hough. In 1904 he gained his masters certificate and commanded the S.S. Maggie Warrington. He was appointed assistant to the Marine Manager of Coast Lines at Liverpool. After a few years in that position he became master of the S.S. Western Coast, and by 1914 was in command of the Southern Coast. 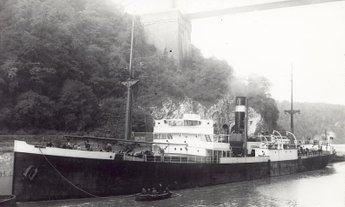 He managed several Coast Line Company steamers during World War 1 without a mishap. In an extract from the Journal of Commerce of the 9th of July 1932, it praises the seamanship of Captain John James throughout the Great War. This was in recognition of the fact that he was traversing some of the most dangerous waters in the world at the time...those of Britain which were under constant u.boat attack. Whilst in command of the S.S. Polberg he rescued 42 crew members of the S.S. Spital which had just been sunk by a German submarine off the Lizard. The u.boat was still in the vicinity yet Captain  James managed to take the rescued crew safely to Falmouth, despite danger to himself and his vessel. On another occasion whilst captain of the S.S. Eastern Coast, he was on the bridge when he spotted a periscope in the distance and the trailing foam of a torpedo coming towards his ship. Using a zigzag steering method he avoided catastrophe whilst simultaneously instructing the wireless operator to send out a warning to all shipping in the area. Captain James was given high praise by the Lords Commissioners of the Admiralty and the Shipping Controller for his safe conveyance of troops, seamen and supplies during his time as commander of the S.S. Monmouth Coast during the Great War. This vessel was sunk in 1917 whilst carrying a cargo of pyrites between Sligo and Liverpool. Sixteen of the seventeen crew were  lost.

John married Mary Edwards in Liverpool in 1904 giving his address as Mayfield Borth. Mary and her five sisters were the daughters of Captain John Edwards of St Dogmaels. The Edwards family had moved to Liverpool 10 years previously to further Captain Edwards' career with Coast Lines Company. F. H. Powell Lines had merged to become Powell Bacon and Hough Lines, and finally  Coast Lines Co. Captain James was obviously familiar with the Edwards family via their maritime connections. Captain Edwards became Commodore Captain for Powells, and later Shore Captain. On retirement he moved back to St Dogmaels. He had commanded the steamers Powerful, Graceful, Faithful and Masterful amongst others.

Captain John James and his wife Mary lived in Liverpool after getting married and raised two children, John Edward b.1905 and Rachel b.1909. John's widowed mother Sarah often visited them and in 1922 died at their Liverpool home. Her body was returned to Wales for internment alongside her husband at the Garn Cemetry Llandre. What a sad life she had had; outliving her husband and six of her children, of whom three sons were lost to the sea. No wonder she visited John and his family as often as possible.

Captain John James died at Falmouth in 1932 whilst in command of the Dolphin. A fitting end to the Captain's story is the following obituary which is at once touching, telling and poignant and could sum up most of Borth's mariners lives:

The late Captain James- as reported in a previous edition of the Cambrian News, Captain John James eldest son of the late Captain and Mrs James, Mayfield, Borth passed away at Falmouth on July 4th. At the funeral service, the Rev Bassett, pastor of the Welsh Baptist Church, Edge Lane, Liverpool, said deceased was a child of the sea. He heard the call of the sea when as a boy he went to gather shells on the shore of his loved birthplace Y Borth. Mariners had by their courage and endeavour enriched the story of British civilisation. As the son of the manse he ( Mr Bassett) knew what the churches owed to the unassuming boys who heard the call of the sea in their little sea shells of Cardigan Bay. He knew Captain James' mother and was often thrilled by the way he used to say 'Mam', always the sign of a healthy soul. His large heartedness was a blessing to many. He was also warm-hearted, an he possessed a brave heart.

Carolyn Phillips nee Edwards, Captain John James' granddaughter is proud of her Welsh seafaring ancestors on both sides of the family. Carolyn and her husband Ron have generously provided details and photographs for this inclusion. John Ellis of Aberarth has also kindly provided vital information from his James family archive.