In the 1871 census John Richard Vaughan is noted as the seven year old grandson of John and Margaret Richards at Glanrhyd Cottage. Grandfather John Richards is head of the household along with his  19 year old mariner son Thomas Richards, and daughters Jane and Anne Richards. Another grandson noted on the census was Thomas Davies. Captain John Richard Vaughan's mother was Margaret Richards b.1843, who had married John Vaughan senior, a mariner whose only reference we have is his number which was 134793.

Captain John Richard Vaughan married Catherine Jones b.1866. They had six children, all born in Borth, five boys and one girl, Sarah  b.1891; we may presume that Sarah died as she disappeared from the records. The Vaughan family left Borth some time around 1905 to live in Llanelli. The surviving boys were John James Vaughan 1889-1953, who married Annie Leyshon and served as steward on his father's ship S.S. Electra. Later he became a foundry worker at Llanelli. Evan David Vaughan b.1892, married Hannah Johns in 1922 and became a baker. Robert Gwilym Vaughan b.1895, went to sea  and served as second mate, his number was 11851 and discharge number 567416. Abraham Vaughan b.1898, served as steward on the S.S. Camden. Idris Vaughan b.1900, who married Iris Evans in 1941 was a foundry worker.

Captain John Richard Vaughan's maritime career began in 1881 where he is listed as an ordinary seaman on the schooner Eleanor Jane. He was then on the S.S. Glanystwyth in that same capacity in 1891 and a year later as an AB on the S.S. Lady Mostyn. This latter vessel was commanded by his uncle, William Richards. John was listed as a rescued crew member when the S.S. Glanwern was wrecked at Tarifa Spain. The crew included other Borth men, John Richards, John Morris and John Robert Jones who were landed at Gibraltar.

After his move to Llanelli, John R. Vaughan became  master of the Jason and S.S. Electra. The Jason was lost in a collision in fog in 1918. In the 1901 census it is recorded that young Borth seaman Rowland Ellis, at seventeen years of age, was part of the crew of Electra. No doubt the captain was keeping his Borth connections going as Rowland was the boyhood friend of his two eldest sons 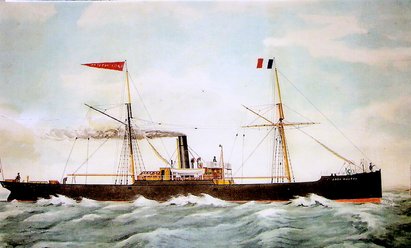