Captain Richard Williams Roberts O.B.E and D.S.C, was born in 1901 at Gordon Villa Borth. Both his parents were from a long line of mariners. His father, John Henry Roberts, was a native of Porthmadoc, he became a Captain in 1898 and commanded the sailing vessel Samuel Holland and the steamers Lestris and Egret. Richard Williams Roberts' mother was from the large Williams clan of seafarers from Borth . 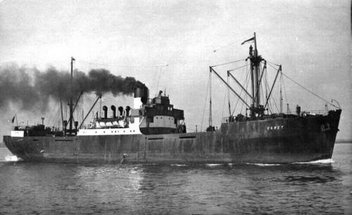 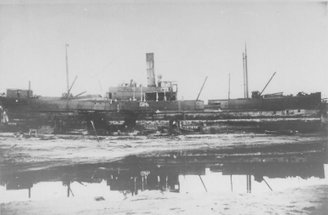 Young Richard was at sea at 16 years of age as an apprentice officer for the Orient Line. His career began in the last 2 years of the First World War during which time he avoided any mishap. He had to serve for 4 years before he was allowed to apply to sit for his first exam to become a Watch Keeping Officer. 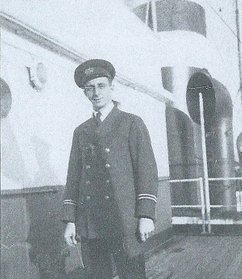 A decade later, at the end of his apprenticeship, he was Fourth Officer on the S.S. Ormonde and subsequently the S.S. Orama. Moving up the promotional ladder he became Third Officer serving in that capacity on the S.S. Orontes and the S.S. Orama. In 1931 he was on the Orama as Fourth Officer. All this moving up  and then back down the ranks was a result of vying for limited berths during the Great Depression of the 1930's when many positions were lost and only the most persistent and talented company men were given employment. Richard Roberts, even then was well regarded, as a letter dated 1932 from the Orient Line owners, held in the Aberystwyth Archives attests to. It thanks him and other crew members for their faithful service during those trying times in the 1930's. Later another letter from 1942 is from his crew where they express their utter confidence in him. 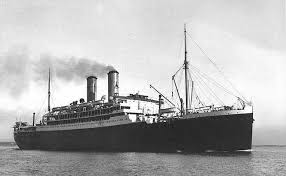 I remember him when he lived in Borth, as a reserved autocratic man who was always pleasant and courteous and was highly respected as he often found positions for local lads such as Ivor Williams, David Tink and Tom Raw-Rees on his vessels, and often guided others in their quest for a sea going career. He was obviously a Captain who earned the respect of his men through his calm authority and as history proves, his peerless seamanship. It was during the Second World War that he really proved himself.

In 1939 the Orient Lines passenger ships were requisitioned for the war effort serving as troop carriers and invasion craft. Richard Roberts became Staff Captain of the Orontes, Otranto and then the Oronsay. In the latter vessel he found himself thrust into commanding a convoy that took part in the Invasion of Madagascar; which was held by the Vichy French at the time. This sudden acceleration of command came about when a Captain Savage was taken ill and Roberts was promoted to the rank of Captain. This indicates the high regard that the Orient Line and The Admiralty held him in. A detailed copy written by Roberts of his part, and that of the crew of the Oronsay in Operation Ironclad is held at the Ceredigion Archives, Aberystwyth. 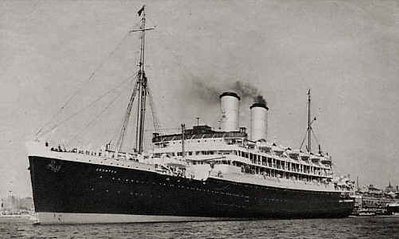 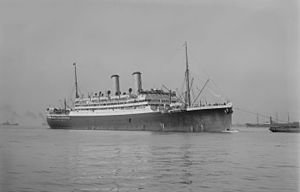 It was not until he arrived in Durban that he was told of the impending invasion as it was a highly guarded secret. The Oronsay became part of Assault Force G and Captain Roberts became Convoy Commodore. During the loading and unloading of materials and men in preparation for the assault Roberts came under pressure as he was two officers short through illness, one of whom was his navigation officer. Roberts had to rely on early 19th century charts of the coast of Madagascar; especially of Diego Suarez Bay. The harbour was full of reefs and the Vichy French had heavily mined its approaches as well as deploying several submarines to patrol the area. Despite all this Captain Roberts' ship ended up unscathed, and as he recalled his crew acted brilliantly and pulled out all the stops to make sure that his commands were followed. In the middle of all this Roberts wryly noted in his report that he wondered if the Royal Navy officers, who ordered him to manoeuvrer a huge requisitioned liner into a crowded anchorage amidst dangerous reefs with a lethal cargo of explosives on board, thought the Oronsay was a wheel barrow!! To add to the difficulties during these complex and dangerous moves there were daily gale force winds to contend with as it was monsoon time. Even worse many of these manoeuvrers had to be done at night when the wind abated somewhat.

The invasion of Madagascar was successful due to the actions of men like Captain Roberts and this was duly recognised when he received the D.S.C. for exemplary seamanship and leadership. The Oronsay returned to Durban with German and Italian P.O.W's who were interned in South Africa, but the authorities refused to take the Vichy French. Many were taken back to Europe after protocols deemed French citizens as not being enemies. Roberts was not so sure about that and did not trust there not to be some kind of rebellion as they were still carrying arms, so he made his own arrangements and was very vociferous in getting a contingent of competent armed guards to keep an eye on things. 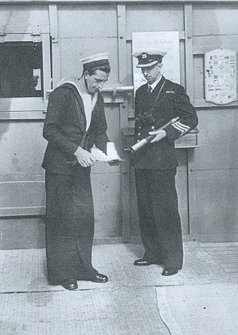 Four months later in October of 1942 Roberts was returning from Durban to the U.K. as Staff Commander under the previously mentioned Captain Savage when the vessel was torpedoed 500 miles south west of Freetown by the Italian submarine Archimede. One of several torpedoes fired hit one of the lifeboats killing half a dozen crew members; they were to be the only casualties.  Roberts was awarded the O.B.E. for his text book evacuation of the stricken ship. He spent nine days sailing a lifeboat that was picked up by H.M.S. Brilliant which repatriated them to Britain. One lifeboat however was picked up by the Vichy French vessel Dumont d'urville and the crew were imprisoned at Dakar. On this particular boat was Borth man Steward Elvin Williams who suffered badly during his time in the P.O.W. camp. A week prior to this event Elvin was called to Roberts' cabin, and despite thinking the worst found two large glasses of whisky waiting, whereupon he was congratulated on his impending fatherhood, and these two Borth men raised a toast to the event. After this sinking Captain Roberts made many recommendations concerning safety after this episode such as providing a mast and sail on the few diesel driven lifeboats and that each should carry extra wireless aerials, lamps, food and clothing. 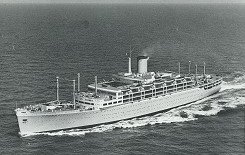 Captain Roberts then took part in the North Africa operations and the Invasion of Sicily and Salerno. The rest of the war he spent ferrying troops around the Mediterranean and he was given a new ship the Samkansa, which was an American built Liberty ship. All such vessels had the prefix Sam as in “Uncle Sam”. He was not happy with this vessel nor the crew. In a fierce storm between the Pallene Peninsula and the Skoplus Islands off the coast of Greece, the vessel's lack of ballast made it very difficult to handle and Roberts remarked that it was the worst storm he had encountered. In addition to this a number of the crew members were charged with stealing some of the cargo, it is obvious that all this was a far cry from passenger liners with selected crews that Captain Roberts was used to. Yet he canvassed continually for a better mail service for the crew. In 1947 he moved to command the S.S. Empire Doon, again doing repatriation work. It was during this time that he sent a letter to his employers criticising the poor attitude and service towards passengers and crew in the West Indies. On this occasion he got a reprimand but it proved to be prophetic and makes interesting reading with reference to tourism. 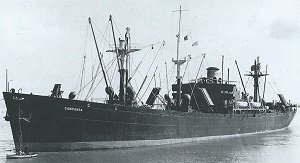 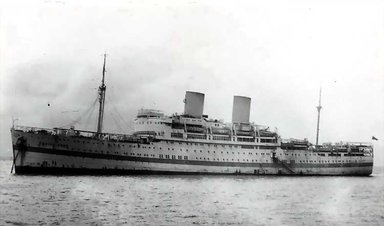 The Captain was so highly regarded by his employers that in 1949 he was seconded on loan for a year to the U.N. to oversee the shipping of hundreds of thousands of displaced persons, many of whom went to America, Australia, New Zealand and Canada. He was then First Officer on the Orantes and then the Orcades. In 1950 a new Oronsay was built by John Brown and Co. Clydebank, and Captain Roberts took over command and from there he went on to command the Orontes and the Otranto from 1953 to 56. The next 2 years he captained the Oronsay and then in 1960 the Otranto. 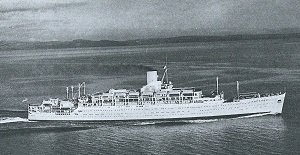 For over a decade he carried thousands of passengers around the world on Orient Line cruise ships and was happiest in this task. He had a distinguished 50 year career at sea and was honoured by his country for his contributions during World War Two. For a decade after the war he lived at his birthplace Borth and then moved to Fishguard and then back to Llandre near Borth, to live at a house which is still today called Oronsay.

My gratitude to the Aberystwyth Archives who have a substantial portfolio on Captain Roberts' career, and also his relatives the late Tom and Ann Raw-Rees Brynbwl Farm and Dafydd and Simon Raw-Rees for photographs and personal recollections